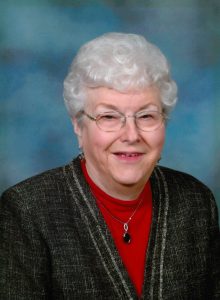 Prayer Service at 7 P.M. Thursday at the chapel

Committal at Schuyler Cemetery  Lunch following in the church hall

Memorials to the church or Colfax County Senior Center

Melvajean was born January 6, 1929, in Tobias, Nebraska to Joe and Clara (Most) Gewecke.  The family moved to Schuyler and she graduated from Schuyler High School in 1947.  On June 8, 1949, she married M. Duane "Kinky" Kluck at St. John's Lutheran Church, Shell Creek.  They lived and farmed northwest of Schuyler and Melva moved to town in 1995.  She had taught rural schools and worked at Ben Franklins, Schuyler Pharmacy and Dufek's Jack and Jill.  She was a 50 year member of Immanuel Lutheran church, taught Sunday School, held offices in the Ladies Aid and Church Council, led girls 4-H at Wilson and was a member of the Wilson Extension Club.

Melvajean is survived by two daughters; Susan (Chuck) Emanuel of North Bend and Cindy (Al) Sadowski of Omaha, one son, Darrel (Nancy) Kluck of Center  Point, Iowa. 9 grandchildren, 11 great-grandchildren and 3 great-great grandchildren.  She was preceded in death by her parents, husband Kinky in 1994, daughter Kathy Kluck in 2018 and three brothers, Marvin was killed in World War II, Wesley and Gaylord Gewecke.