Lois Greaser, 75, of Richland, died Saturday, May 7, 2022, at the Columbus Community Hospital in Columbus 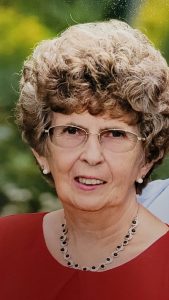 Visitation Tuesday 5-7 with 7 P.M. Rosary Service at the chapel

Lois was born November 7, 1946, in Schuyler to Francis and Mary (Dostal) Volsicka.  She attended area schools and graduated from Clarkson High School.  On September 6, 1968, she married Frank Greaser at St. John's Catholic Church in Howells.  They lived south of Schuyler until 1972, when they moved to Richland.  She and Frank owned and operated Greaser's Village Inn in Richland until retiring in 2013.  She loved caring for her flowers and spending time with family when she wasn't working.

She is survived by her husband, Frank of Richland, two sons; Scott (Piywan) Greaser of Riverview, Florida, Brian Greaser of Haines City, Florida, two grandchildren; Anthony (Kayleigh) Greaser and Ariel Greaser, two sisters; Diane Hollman of Columbus and Bonnie (Larry) Otto of Clarkson, sister-in-law Lucille Shelton of Richland and several nieces and nephews.  She was preceded in death by her parents and brother-in-law Jerry Hollman.