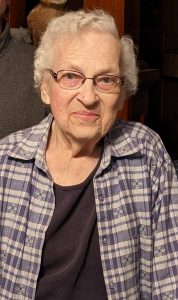 Lunch following at the hall

Memorials to the Prague Rescue Squad or National Cemetery

Maxine was born February 25, 1932, in Morse Bluff, Nebraska to Joseph L. and Tillie (Mach) Kavan.  She attended area schools.  On June 2, 1956, she married Bernard Kratky at the North Bend Presbyterian Church.  They lived in Fremont and worked for Hormel.  In 1959 they moved to the farm near Prague and she was a faithful “farm wife” and raised their boys.  She was a member of ZCBJ Lodge #29 for over 75 years and was Treasurer for 25 years.  She and Bernard served the on the Board of the National Cemetery for several years.

Maxine is survived by her husband, Bernard of Wahoo, two sons, Rodney Kratky and his fiancé Barb Dye and Kenny Kratky,all of Prague, a brother Lester (Marlene) Kavan of Des Moines, Iowa. Grandson Chad Kratky and many nieces and nephews.  She was preceded in death by her parents, son Brian Kratky, four brothers; George, Richard, Ruben and Joie Kavan and three sisters; Helen Settles, Joan Kavan and Marcella Shestak.