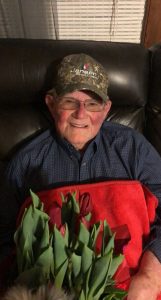 Service will be livestreamed on Kracl Funeral Chapel Facebook page

One hour prior to services on Wednesday, at the church

Lunch in the church hall following the committal

Dale was born on September 21, 1933 to John and Frieda (Poppe) Braasch in David City, Nebraska.  He was baptized and confirmed at Immanuel Lutheran Church in rural Rising City.  He attended the Immanuel Lutheran Country School and Rising City Public school graduating in 1952.  He joined the Army in 1954 and was stationed at Fort Leonard Wood and also in Verdun France until 1956.  He returned to Rising City and began to help his parents farm.  He married LaDean (Byam) of Ulysses on June 26, 1960.  To this union, five children were born.

Dale loved farming and raising animals with his family.  He was always there to help his children and grandchildren with their 4-H animal projects.  Throughout his years, he enjoyed painting vehicles, watching and reading about airplanes, woodworking projects, Husker sports and an occasional concert.  He enjoyed watching the kids in their sport activities and was proud of everything they did.

Dale was able to put to use his maintainer skills he learned in the army when he became the road maintainer operator for Reading Township and later Butler County.  He took pride in his work on the gravel roads and there were very few snow drifts that could beat him.

He was preceded in death by his parents, John and Frieda Braasch; brother Robert Braasch and brother-in-law Dean Lewis.