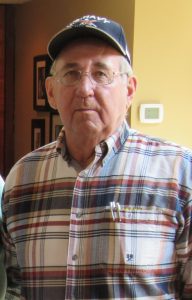 Myron W. Schneider was born March 3, 1946 to Melvin & Adeline (Loseke) Schneider.  He attended rural country schools until the family moved to Schuyler and graduated from Schuyler High School in 1964.  He then joined the Navy where he served from 1964-1969 and from 1965-66 he served on the USS Princeton during the Viet Nam Conflict. He was very proud of his military service and serving his country.

During the course of his life he served on several boards including the Schuyler Baseball Corporation, Schuyler Golf Club and District 28 School Board.  He was a member of the Knights of Columbus, VFW and American Legion.

He owned and operated Schneider Oil in Schuyler for over 34 years before retiring in 2014.  He was a man of simple pleasures having coffee (or drinks) with friends over casual conversation to keep up with the latest news or roaming around Schuyler to keep up with what was happening in Schuyler.  He loved his John Deere tractor and was like a big kid when he got to go dig in the dirt or move snow.   He looked forward to Sundays when he could play multiple rounds of golf with the “family” and sometimes even his wife!  He enjoyed following his children’s sports and later in life his grandchildren’s activities.