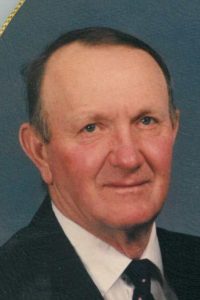 Visitation Tuesday 5-7 and Wednesday 9:30 A.M--all at the church

Committal in the Leigh Cemetery with Military Honors

Lunch at the Leigh Fairgrounds following the committal

Memorials to the church or family for future designation

Charles “Charlie” Frederick Ahrens passed away at his home on January 6, 2022.  Charles was born September 27, 1934 on the family farm southeast of Leigh to Alfred and Agnes (Higgins) Ahrens.  He attended District 45 through 8th grade and graduated from Leigh High School in1951. He farmed with his parents for several years and then served in the U.S. Army from 1954 to 1956 (stationed in Germany). He attended the University of Nebraska in Lincoln upon returning from military service and graduated from East Campus in 1960 with a degree in agronomy and a minor in chemistry.  Charles married Kathleen Walter on August 25, 1957 at St. Peter’s Lutheran Church in Creston.  They lived in Lincoln and Waverly while Charles completed his studies, and then farmed Kathleen’s family farm outside Creston where their children, Clark and Carrie, were born before moving to the Ahrens family farm southeast of Leigh in 1965 where they farmed the next three decades.  After moving to Leigh in 1995, he worked at the Maple Valley Co-op until his retirement shortly after his 80th birthday.Charles was a lifelong member of St. Paul’s Lutheran Church and he and his wife were active in Loyal Lutherans.  Charles served on the St. Paul’s church council and cemetery board, the Co-op Oil Board, the Tri-County Board, and was a swine and beef superintendent at the Colfax County Fair for many years.  Charles was a 4-H member in his youth and was the leader of Blue Banner 4-H Club from 1970 to 1980.Charles will be remembered by his family and friends for his amazing memory, practical jokes and love of storytelling.  His grandchildren and great-grandchildren brought endless joy in his last years, and it was a common sight to see his hands up when a “great” wanted to play with a toy rifle. Grandpa loved playing the “bad guy.