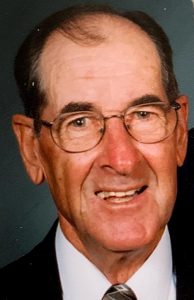 Visitation Monday 5-7 with 7 P.M. rosary for Knights and Parish at the church

Visitation Continues Tuesday one hour prior to Mass

Memorials to the Skull Creek Fire Department or the church

Beno Bartunek, was born on June 7, 1930, to Vaclav ‘Jim’ and Tillie (Prochaska) Bartunek near Bruno. He attended District 39 country school and graduated from Dwight Assumption High School in 1948. He briefly attended seminary before returning home to work on the family farm which became a lifelong passion and career. On October 23, 1954, he married Dorothy A. Novacek at St. Anthony’s Church in Bruno. They were married for 58 years before she passed in 2012. Two sons were born to this union.

Beno spent his life on the farm with Dorothy by his side - raising crops, Charolais cattle and hogs of every size, shape, and color. He was a lifelong member of Sts. Peter and Paul Catholic Church in Abie where he was also a church board leader and member of the choir. Beno was also a member of the Knights of Columbus, Abie Fire Department, Nebraska Charolais Association, a 4-H leader, and was involved with the Schuyler Bull Test Station. Beno and Dorothy attended many polka festivals throughout the Midwest where they made several lifelong friends.

Beno will be most remembered for his love of polka dancing and cartoons, always having pockets full of Tootsie Rolls and dog treats, unforgettable talks, lessons, deep belly laughs and his strong, yet playful and genuine spirit. He was an idol of a father and grandfather - a true example of integrity, kindness, and class. His selflessness, remarkable stubbornness, and work ethic ensured everything and everyone he loved was always cared for and in order. If he had it his way, he would still be walking fields, tending to the animals, and dancing with family and friends. We are incredibly grateful to have experienced a soul as special as his, to witness his way of life, and to have felt his authentic unconditional love. He has set the bar high for us all.