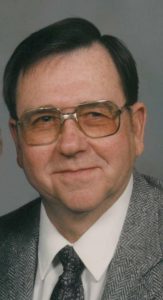 Visitation Friday one hour prior to services,  at the church

Committal in the church cemetery with Military Honors

Tom A. Barlean was born January 9, 1935, in David City to George A. and Anna (Muller) Barlean. Tom graduated from David City High School in 1951 at the age of 16 and joined his brother George in operating the family farm following the death of their father.

From 1957-1959 he proudly served in the 39th Infantry of the United States Army. He served in Fort Collins, Colorado, Fort Riley, Kansas, and Fort Chaffee, Arkansas.

Tom married Barbara Schroeder on August 17, 1958 at Immanuel Lutheran Church in Rising City. Together Barb and Tom raised their two children, Steve and Patricia (Patti), on a farm outside of David City. He farmed until he retired and proudly passed along the daily farm operations to Steve.

Tom was a conscientious, genuine man with a great love for family, farming, and polka  - not necessarily in that order. He was active in his church and enjoyed any activity that allowed him to spend time with his loved ones; especially when he was able to get into a tractor to assist Steve in the field. He was an active member of Immanuel Lutheran Church and had served on the Township Board.