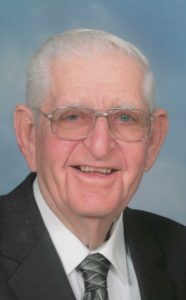 DUE TO THE CONCERN FOR THE SPREADING OF COVID, THE FAMILY HAS REQUESTED PRIVATE SERVICES BE HELD.  CARDS/MEMORIALS CAN BE SENT TO KRACL FUNERAL CHAPEL, P.O. BOX 9, SCHUYLER, NE  68661-0009

MASS WILL BE LIVESTREAMED ON KRACL FUNERAL CHAPEL FACEBOOK PAGE AT 10:00 A.M.

Donald E. "Don" Medinger was born March 17, 1929 on the family farm at rural Bellwood, Nebraska to Emil and Agnes (Ronkar) Medinger.  He attended Dist. #3 school at rural Bellwood and graduated from Marietta High School in 1946.  On January 25, 1951, Don was united in marriage to Irene Eller at Presentation Catholic Church.  They lived and farmed the Medinger "home place" north of Octavia.  Don was a lifelong farmer and a member of Presentation Catholic Church.   He enjoyed going  to dances with Irene.  Don was an avid hunter and fisherman.  He loved to make wooden puzzles, birdhouses, yard art and could fix anything.