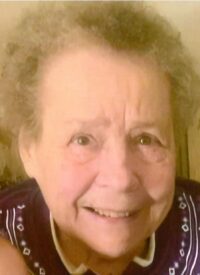 Visitation Friday 5-7 with a 7 P.M. Rosary for the Parish and PCCW both at Kracl Funeral Chapel, David City

Mary Jane Baer (86) passed away at her home on November 14, 2021 with her family at her side.  She was born in Wahoo, Nebraska on January 3, 1935 to George and Marie (Komenda) Skokan.  In 1952 she graduated from Weston High School where she excelled in volleyball and softball. She was united in marriage to Robert (Bob) Baer on April 18, 1953 at St. John Nepomucene Catholic Church in Weston, NE.  They made their home in David City where they raised their four children Sharon, Wayne, Marilyn and Tom.

Mary Jane was employed by the David City Banner Press as a secretary and typesetter for 25 years.  She later retired from the Butler County Sheriff’s Dept. where she served as bookkeeper and dispatcher for 20 years. She was a dynamic force within the dept. and highly respected by law enforcement officials.

In her early years Mary Jane enjoyed fishing, golfing and a rousing game of pitch.She also loved gardening, baking, and canning.  She took great pride in her garden and her family lovingly called her the “Tomato Queen”.  She also baked countless loaves of delicious zucchini bread for her family and friends. Her steakettes on Christmas Eve were a family favorite.  Nobody could make them as good as grandma! She attended many sporting events and school activities always cheering for her grandchildren.  She was a loyal Husker fan and loved watching football and volleyball on TV with her family. Mary Jane was a member of St. Mary’s PCCW, the VFW Auxiliary, the Red Hat Society and served as Den Mother for the Boy Scouts of America.  Mary Jane’s family, friends, neighbors and co-workers knew her to be independent, outspoken, dedicated and feisty.