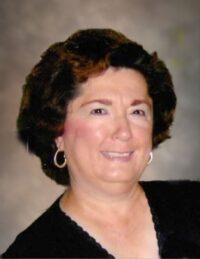 Visitation 9-10 A.M. Wednesday at the Chapel

Doris was born November 24, 1946, in West Point, Nebraska to Fred and Beatrice (Kment) Brazda.  She attended Fisher School and graduated from Schuyler High School in 1965.  On September 30, 1967, she married Eugene F. Sindelar at St. Mary's Catholic Church in Schuyler.  Together they owned and operated Gene's Restaurant  in Schuyler for 30 years.  She enjoyed cooking and baking, cultivating plants, listening to country music, playing Rumicube and watching sporting events.  She had a distinctive laugh, pleasant smile and a kind word for everyone.  She derived much joy from watching her children, grandsons and extended family grow.

Doris is survived by her husband of 54 years, Eugene Sindelar of Schuyler, daughter and son-in-law Kelly (Brett) Hanson and grandsons Cooper and Kyler, all of Omaha, Theresa Sindelar, Lincoln,  son Jefferey (Polly) Sindelar, of Estes Park, CO, sister, Arletta (Steve) Volkmer of Schuyler and many relatives and cousins.  She was preceded in death by her parents, Fred and Beatrice and twin sister Diane.