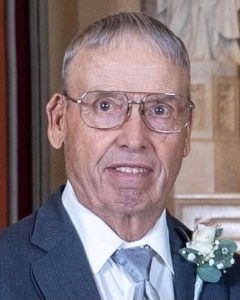 Donald “Don” Howe, 82 of David City, Ne died Sunday November 7, 2021 at his home in David City, Ne surrounded by his loving family.Don was born June 20, 1939 to Glen & Irene (Shaver) Howe in David City, Ne. Don’s childhood was filled with racing shenanigans, farm chores and a true love for all things mechanical. He attended District 66 until his family moved to town in 1949. From there he attended David City High School and went on to finish Carburetor School in 1958.

That very same year Don began working for Louie Martin at the Amaco Station. Don worked on countless cars, changed more tires than anyone can count, not only would he fill your gas tank, but he would make sure your windows were clean and your tires were full, always giving service with a smile   In 1960 he joined the Army National Guard 134th Infantry Achieving the rank of Sergeant. He was assigned to the mortar division earning Expert Badge with Auto Rifle Clasp. Don was stationed in South Carolina and was honorably discharged in 1966.   In 1962 while cruising around town in his hot rod, he met the love of his life, Marci. The two of them were married on July 25, 1964. Four children were born of this union. In 1962 he joined the David City Volunteer Fire Department. He was a certified EMT for several years. He was honored to have a son-in-law, grandson, and four granddaughters follow in his footsteps, serving four months shy of 60 years. In the early 70’s Don also became a Scout Master for his son’s in the Boy Scouts, that included trips to the Grand Canyon and Colorado. Don stayed active in the Boy Scouts until about the mid 80s.

Don was a very humble, and caring person, he knew how to fix most anything and was always willing to help a friend in need. One of the things he loved the most, was undoubtedly  his family. He was the biggest scout fan at any sporting event, the best babysitter, a chauffeur, a plumber, a carpenter, a storyteller and a dancer. He gave the best hugs and told the funniest jokes and made the best mashed potatoes. He enjoyed going hunting, gambling and the occasional Old Mill Light. He will forever be missed, and his memory never forgotten. Don was a member of St. Mary’s Catholic Church for 57 years.