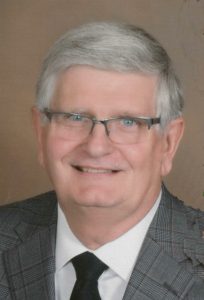 Memorials to the church, Aquinas or Future Generations

Lunch at the David City Auditorium

Ron was born July 16, 1948, in Wahoo to John and Judy (Wotipka) Vaca. He graduated from Cedar Bluffs High School in 1966 and Nebraska Wesleyan in 1971.  On December 11, 1971, he married Patty Sukstorf in Cedar Bluffs. Ron and Patty moved to David City where he helped establish the first RURAL county health department in Nebraska.  He continued to work for the Butler County Health Center for 42 years.  After retiring, he worked for two years at St. Joseph's Villa.  Ron was an ambulance driver for the hospital and made 1169 trips.  He served on the Aquinas School Council for 16 years, was a member of the David City Volunteer Fire Department for 15 years and St. Joseph's Villa Board.  He was a member of the church, served on the Parish Council and was a member of the Knights of Columbus.  Ron was a sports fan and loved watching and attending all sporting events.  He loved traveling with Patty, attending his grandkids events and socializing over a good breakfast.  He was very proud of his two daughters and six grandchildren.

Ron is survived by his wife, Patty of David City, two daughters; Angie (Perry) Myers of Blair and Susi (Mick) Coufal of David City, six grandchildren; Madeline, Ellie and Jillian Myers and Kelby, Kayle and Kole Coufal, and sister-in-law Marcia Franklin.  He was preceded in death by his parents, mother and father-in-law Clarence and Ruth Sukstorf, and brothers-in-law Randy Sukstorf and Roger Franklin.