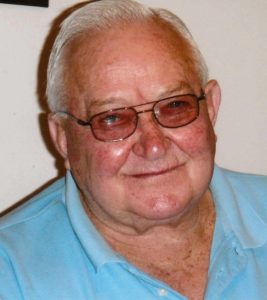 Tom was born July 6, 1931, in Schuyler to John F. and Ada (Wolfe) Krivohlavek.  He attended area schools and graduated from Schuyler High School in 1949.  On March 29, 1951, he married Shirley Varejcka at the Methodist Church in Schuyler.  They lived and farmed north of Schuyler.  After farming, they moved to town and Tom worked as Plant Manager of Husker Coop for many years.  Tom had served on the Schuyler School Board, was a County Commissioner, Board Member at the Schuyler High Rise and was the representative for Colfax County to the Northeast Nebraska Area Agency on Aging.   He enjoyed the New York Yankees, Nebraska Cornhuskers and was very patriotic.  He loved good times with friends and above all, time spent with his family.  Tom was a very devoted husband to Shirley until her death in 2004. He will long be remembered as a trustworthy and loyal friend to many.

He is survived by his daughter, Lynn (Darrell) Hruska and son Mike Krivohlavek of Schuyler, three grandchildren; Brad (Mary) Hruska of Columbus, Drs. Justin (Aldo) Hruska of Detroit and Danielle (Jose) Rodriquez of Nogales, Arizona, seven great-grandchildren; Brennan, Alena and Bekka Hruska, Larissa and Jorge Galvan, Jordan Magana, Adrian Rodriquez and many nieces and nephews.  He was preceded in death by his parents, wife Shirley in 2004, three brothers, John, Bill and Bob and two sisters, Shirley Kruger and Mildred Louden.