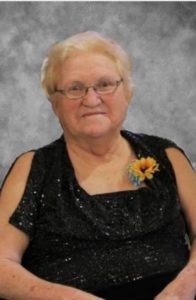 She will be cremated with committal at a later date

Lunch in the church fellowship hall immediately following the funeral

Betty was born November 15, 1945, in Ewing, Nebraska to Vladek and Mabel (Raymer) Sladek.   She graduated from Atkinson High School in 1963.  In 1967, she married Patrick O'Leary and they had three daughters.  They later divorced.  On September 3, 1983, she married Don Waak at Trinity Lutheran Church in Schuyler.  They lived and farmed northwest of Schuyler.  Betty worked in assembly for Behlen Manufacturing for 31 years.  She loved bowling and crocheting as well as caring for her horses.  Her greatest  love was for her children and grandchildren, and of course, Don.  She also leaves behind her precious dog, Princess.