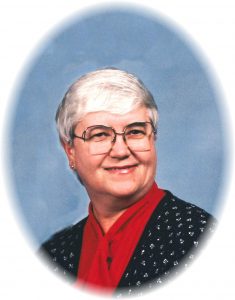 Visitation Saturday 9:00 a.m. till time of service at church

or mass intentions at the parish of the donor's choice.

Ruby L. Langhorst was born December 7, 1936 in Milligan, Nebraska to Emil and Helen (Fujan) Svec.  She attended school in Milligan and graduated from Milligan high school.  On October 4, 1958, Ruby was united in marriage to Robert L. Langhorst at Grace Lutheran Church in Ohiowa, Nebraska.  Two children, Rand and Rusty were born to this union.  Before moving to David City, Ruby worked as a Dietician at the hospital in Burwell.   After moving to David City in 1986, Ruby worked as the cook at the Butler County Senior Center for many years.  She was a member of St. Luke's Methodist Church in David City.

Ruby is survived by her sons, Fr. Rand Langhorst of Beatrice, Rusty (Barb) Langhorst of Brighton, Colorado, two grandchildren, Chesney and Luke Langhorst.  She was preceded in death by her parents, brothers Bernard, Lumir and Jim Svec, and an infant sister Betty.