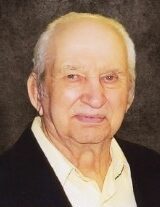 Eugene E. Gene Novak was born November 17, 1933 on a farm near Bee, Nebraska to Emil J. and Ann B. (Sedlak) Novak.  He attended school at Ulysses and graduated from Ulysses High School in 1951.  Gene served in the United States Army from 1954 to 1956 serving in Japan and Korea.   He was honorably discharged with the rank of Sergeant.  He was very proud to be a veteran.  Following his army service he operated heavy equipment for Leo McGowan of Ulysses until he went into farming, once driving a scraper 1,000 miles from Shreveport, LA to Ulysses at 28 miles per hour.  He had an article published in Country Magazine about his journey.  On April 17, 1956, he was united in marriage to Margaret Svoboda at Holy Trinity Catholic Church in Brainard.  Gene farmed near Gresham and later moved near Surprise in 1966 and continued farming until he moved to Rising City in 1981.   In 1981 he began operating heavy equipment for various businesses until his retirement.   He was a member of Sacred Heart Catholic Church, Shelby.