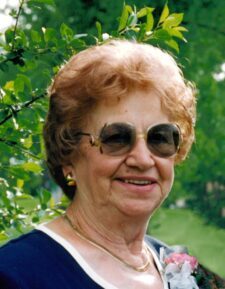 Doris "Jackie" Wrede was born January 29, 1924 at David City, Nebraska to Henry and Anna (Meysenberg) Lukassen.  She attended school in Brainard and graduated from Brainard High School.  She later attended the electronic radio television institute and railroad construction, working for the Union Pacific Railroad in 1943 during WWII.  On January 29, 1948, "Jackie" was united in marriage to Donald Wrede at St. Mary's Catholic Church in David City, Nebraska.   "Jackie" enjoyed gardening and canning and loved babysitting her grandchildren and spending time with them.  She was an active member of St. Mary's Catholic Church where she was a member of the PCCW and a past church board member.   "Jackie" was also a member of the American Legion Auxiliary.