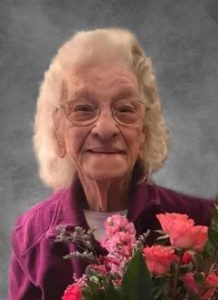 Lunch at the Schuyler Golf Club immediately following the service

In lieu of flowers memorials to the family for future designation

Adeline  was born on September 7, 1920 to Alex and Anna Marie (Walker) Stamm in Wayne County, Nebraska.

She married Malcolm “Smokey” Thompson, Sr. On January 7, 1941 in Sioux City, Iowa.   Adeline was a homemaker and caring mother to their five children.  They lived for over 50 years in Schuyler and the last 3 ½ years she lived at Marquis Place in Omaha, Nebraska.

Her many hobbies included knitting, quilting, sewing, gardening, baking and taking care of her flowers. She was a member of St. John’s Lutheran Church.