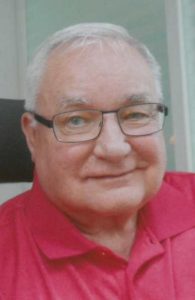 NOTICE CHANGE OF TIME FOR VISITATION

Duane began his journey on September 18, 1944, in David City, child of Joseph  G. and Rose E. (Kozisek) Svoboda.  He attended area schools and graduated from East Butler High School of Brainard  in 1962.  He joined the United States Navy that year to answer the call to serve his country.  During his time in the Navy he represented our country with pride and honor in many ports of call.  Following his honorable discharge from the Navy, he married his best friend, Connie Palensky on October 5, 1968, at Sts. Peter and Paul Catholic Church in Abie. The unconditional love they had for one another grew from the two of them to a beautiful family of five which included Dawn Marie, Robert Allen and Eric Charles. He worked for over 40 years at the Butler Public Power District working as lineman, meter-man and then Operations Manager, retiring in 2006.

Duane loved fishing, camping, gardening and the long hog roasts that brought him  so much joy. He was a very kind, compassionate man.  Humble and soft spoken, he had a passion to help anyone and everyone in need.  Duane  loved watching his seven grandchildren  grow into the beautiful souls they are today.  There wasn't a baby born into that family that escaped being gushed over by him.  Though he faced many challenges, he persevered for over a decade, his limitations not defining who he was, with a smile so large and a heart overflowing with love for everyone he met.