Covid Restrictions apply--Masks must be worn

Funeral will be live streamed on Kracl Funeral Chapel Facebook 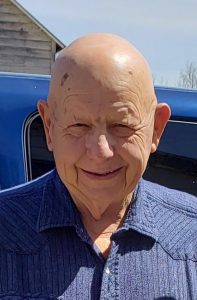 Allen was born March 31, 1944, in Richland, to Herbert and Esther (Klug) Grotelueschen.  He attended area schools and graduated from Schuyler High School.  Allen went on to the University of Nebraska in Lincoln where he earned a Bachelors Degree in Agronomy.  He then volunteered and joined the United States Army during the Viet Nam Conflict.  Following an Honorary Discharge, he married Betty McNally on October, 11, 1969, at St. Augustine's Catholic Church in Schuyler.  They lived and farmed in the Richland Community.  Allen was very active in the 4-H, Colfax County Ag Society, FSA Board and served several terms on the School Board at District 1.  He was also a member of the "sheephead" club.  Allen's  greatest love was watching Riana in softball and James in football, actually anything and everything his grandchildren did.

Allen is survived by his son, Mark (Mary) Grotelueschen of Leigh, grandchildren Riana and James, and his in-laws; Karen(Dennis) Waak of Schuyler, Sharen (Ken) Hunt of Kansas City, Missouri, and Jerry (Judy) McNally of Schuyler.  He was preceded in death by his parents, wife Betty(2005), infant grand-daughter,Hallie Grotelueschen, brother Leland and parents-in-law,  Leo and Mildred McNally.