at her home in Schuyler. 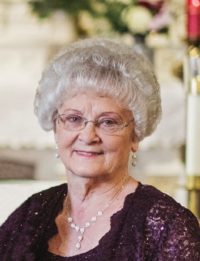 MASKS AND SOCIAL DISTANCING REQUIRED FOR VISITATION AND MASS

Visitation Thursday 5-7 P.M. with 7 P.M. Rosary for Knights of Columbus and Parish

Carolyn was born November 22, 1942, on the family farm near Clarkson, to Emil James and Delores Frances (Glodowski) Papousek.  She attended Clarkson Public School District #42-Macedonia School and graduated from Clarkson High School in 1961.  She worked at Moore's Department Store in Clarkson until she married Marvin James Korecky on January 22, 1963, at St. Mary's Catholic Church in Leigh. They made their home in Schuyler where they had two daughters, Kelly Ann and Kristine Kay.  Carolyn worked at Furtak's Department Store from 1963-1964, Becton Dickinson in Columbus from 1969-2008 and then became a paraprofessional substitute at Schuyler Elementary School from 2010-2012.  She enjoyed sewing, making Christmas tree skirts and stockings, collecting salt and pepper sets and exploring family genealogy.  Carolyn and Marvin spent years traveling across the country seeing the sights (their favorite being Branson) and camping at Gavin's Point.  Carolyn loved watching her grand-kids'  sporting and musical events and was especially proud of their college successes.  She was a member of Divine Mercy Parish Women, a CCD Teacher and B-D Alumni Member.  Carolyn will be remembered as a giving person who always put others above herself.  Her positive spirit and caring nature will be deeply missed.