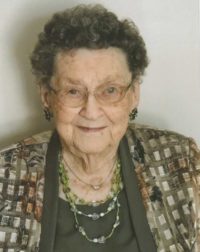 Visitation Monday 9:00 A.M. until time of Service, at the church

Aggie was born February 8, 1921, in Ulysses, Nebraska to Joseph and Matilda (Slovacek) Kulhanek.  She attended school in Dwight.  On November 2, 1935, she married Louis H. Svoboda at St. Mary's Catholic Church in Lincoln.  Aggie was well known in the area for her cooking and baking as well as all the teaching she did regarding her Czech heritage.  She was a member of St. Mary's Catholic Church, David City, the PCCW and the Heritage Club.  Her children said "if you said she loved cooking, baking, teaching and dancing, that would sum up her life".  Aggie was truly the Matriarch of her family and enjoyed all the time she had to spend with them.  Aggie had a list of over 30 places they called home over the years, living in their David City home the last 40 years.