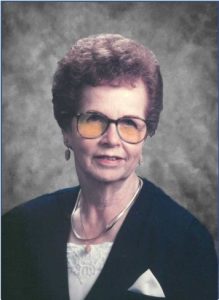 Memorial Service to be held at a later date

In lieu of flowers, memorials may be directed to the family for future designation

DeLoris was born February 22, 1923 at Verdel, Nebraska to Jorgan and Tina (Christensen) Jorgansen.  she attended grade school at Verdel, Nebraska and graduated from high school in 1940 from Lynch, Nebraska.  She also earned her teaching certificate and taught school for a short period of time.

On October 3, 1942 she married Lyle R. Farran at Butte, Nebraska.  They lived and ranched in Holt County, Nebraska for the first years of their married life.  They then moved to Meadow Grove, Nebraska in the spring of 1949, where they owned an IHC Farm Implement dealership.  In 1953 they moved to Stanton, Nebraska where they farmed and operated a cattle feedlot.

DeLoris was a wife, mother and homemaker as well as the bookkeeper for the family business.  She was a member of several area county women’s clubs as well as a member and flag bearer of the Stanton VFW Auxiliary.

She was preceded in death by her parents, her husband Lyle and a brother Leo Jorgansen.