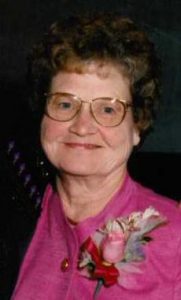 Betty was born February 11, 1931, in Schuyler to Frank and Mary (Posvar) Bohac.  She attended area schools and graduated from Schuyler High School.  On October 4, 1960, she married Leonard Hobza at St. Mary's Catholic Church in Schuyler.  They lived and farmed northeast of Schuyler and later retired to town.  Betty was a farm wife and homemaker.  She was a member of Divine Mercy Parish, St. Mary's Catholic Church in Schuyler.  Leonard died in 2013 and Betty moved to Lincoln to be close to Ken, Amy and the grandchildren.

She is survived by her son, Ken (Amy) Hobza of Lincoln, grandchildren Cameron and Hannah of Lincoln and many relatives.  She was preceded in death by her parents, husband Leonard, three sisters; Edna Wurdeman, Lillian Svec, Darlene Schindler and four brothers; Leonard, Frank "Tuffy", Ernie and Richard Bohac.