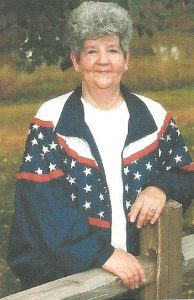 Visitation Wednesday one hour before service at the church.

Memorials: to the family for future designation

Annie Mary (Hodgkins) Keith was born February 12, 1929, in Brooklyn, New York, to Cecil F. and Annie Mary (Patton) Hodgkins.  She was raised in Brooklyn and lived there until the age of 18.  She graduated from Midwood High School in Brooklyn.

On August 28, 1947, she was united in marriage to Mansel "Frank" M. Keith.   Five children were born to this union.   They lived at Ft. Bragg for many years before moving to Germany in 1958.  They later lived at Ft. Campbell, Kentucky and later moved to David City in 1975.  Annie was a member of St. Mary's Catholic Church and V.F.W. Auxiliary Post 5814 of David City.  She worked at the legion club, bookkeeper for Wright's feed mill, David City Manufacturing and Idelman telemarketing.

She was preceded in death by her parents, husband and son-in-law Glenn D. Carriere.