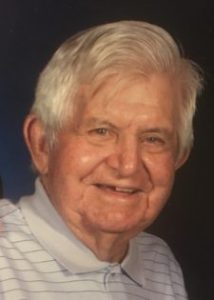 IN LIEU OF FLOWERS MEMORIALS TO THE CHURCH

Jack was born March 11, 1935, in Bellwood, Nebraska to Floyd and Bertha (Langhurst) Napier.  He attended area schools and graduated from Bellwood High School.  On March 25, 1977, he married Lois Holtkamp at the Methodist Church in Bellwood.  He was a farmer and had worked for Frontier Coop in Bellwood after retiring to town.  He served in the United States Army, was a member of the Bellwood Methodist Church and Bellwood Legion Post #327. He and Lois loved horse racing and owned race horses at one time.  Jack also was an avid fan of the Huskers and the KC Royals.

He is survived by two sisters-in-law; Marie Klug of Columbus and Arlene Hajek of Schuyler as well as many nieces and nephews.  Also surviving are his Honorary family members; Jim and Cindy Kallenbach, Adam and Alex Kallenbach, Kylee (Chris) Carstens and Cooper, Kason and Kendrey Carstens. He was preceded in death by his parents, brother Gene Napier and his wife Lois, July 20, 2016.