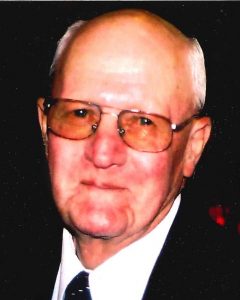 Visitation Monday one hour prior to services, at the church

Lunch in the fellowship hall immediately following the service

Bob was born near Octavia, Nebraska on April 6, 1927, to Ray R. and Anna (Eberly) Davenport.  He graduated from Schuyler High School and entered the United States Army where he served from 1945-1947.  He was a member of the Schuyler American Legion and the Last Man's Club.  On July 28, 1949, he married Connie Metzler at the First Presbyterian Church in Schuyler.  They lived and farmed in Butler County retiring to Schuyler.  Bob loved to hunt, play cards and spend time with friends and family.  He and Connie belonged to a card club for many years and he enjoyed Pinochle and Taroks.  He was never more happy than when he was surrounded by grandchildren and great-grandchildren.