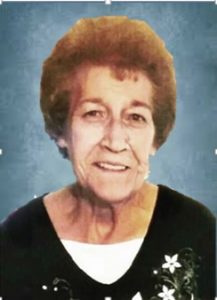 Betty was born to Anton and Gladys Wirka on October 29, 1942 at Soukop’s in Prague. She went to Country School Dist 73 in Rescue and graduated from Prague High School at the age of 16.  She moved to Lincoln and enrolled at Lincoln School of Commerce and then worked at Consumers Public Power until she married Charlie Prochaska on August 1, 1964.  They built a house on a farm south and west of Prague where she lived until she passed away.  They have 4 children, Dianne Jackson, Brenda, Brian and Gary.

Betty was a homemaker up until her husband Charlie died in  November 1991 then  she started work at Henningsen’s in David City where she worked until she retired.

Betty loved to garden and she had a very large garden to where she grew more vegetables than she could give away.

She was an excellent cook and everyone loved the sultz she made.

She raised hundreds of chickens and picked hundreds of eggs and everyone from town would come to the farm to get fresh eggs from her.

Betty had a heart of gold and everyone knew Betty for her silliness and always telling jokes.

She loved watching Nebraska Football games with her grandson Tyler.