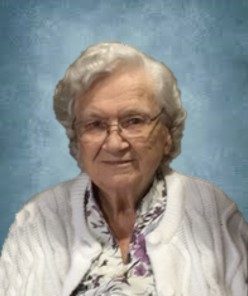 Visitation Thursday one hour prior to services at the church

Committal in the Schuyler Cemetery Thursday at 1:30 P.M.

Gloria Odenreider was born August 9, 1923, in Sumner, Nebraska to Kazimir and Anna (Johnson) Krula.  She graduated from Schuyler High School in 1940 and taught in many area schools, including Clarkson and Snyder, while taking night classes until she earned a Master’s Degree from Wayne State Teachers’ College.  On May 21, 1946, she married Norbert Odenreider at St. Mary’s Catholic Church in Schuyler.  They lived in Leigh and Scribner, settling and farming in the Dodge area.  Gloria moved to Schuyler in 1990 following Norbert’s death, and eventually moved to a farm north of Rogers.  Gloria was a member of St. Charles Catholic Church of North Bend, the VFW Auxiliary, Garden Club and St. Ann’s Altar Society.  She is survived by her daughter, Louana (Edward) Neesen of Rogers and a son, Eugene Odenreider of Tempe, Arizona, one sister, Adoline Telecky of David City, five grandchildren and 13 great-grandchildren and several nieces and nephews.  She was preceded  in death by her parents, husband Norbert in 1983, an infant grandchild, sister and brother-in-law Mary and Chris Bell and brother-in-law Riley Telecky.