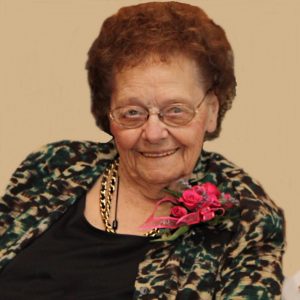 Lunch in the Church basement

Milada “Mildred” Mae Bures was born May 1, 1923, to Alois and Mary (Pacas) Bures on a farm near Dodge.  She attended grade school in rural Cuming county and graduated from Dodge High School in 1940.  She married Stanley L. Sedlacek on December 7, 1942, and they raised their family on a farm north of Leigh before retiring in town.  After Stanley’s passing in July of 1979, Mildred later moved to David City and married Alois Matulka.  Mildred was a proud Czech and loved to make dumplings and bake kolaches as well as sing and dance to polka music as a member of the “Happy Czechs” singing group.  She was as generous with her time as she was with her sewing talents, as a member of St. John’s Lutheral Church Women (LCW) in Leigh and an active volunteer at St. Joseph’s Villa nursing home in David City, where she was named “Volunteer of the Year.”

Mildred was preceded in death by her husbands, parents, brothers Rudy, Lumir, Louis and Eddie Bures and sisters Libbie Schroeder and Blanche Spulak.