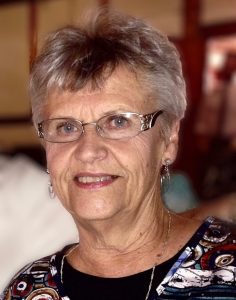 Visitation Friday 4-7 P.M. with 7 P.M. Rosary for Knights and Parish

at Kracl  Funeral Chapel in Schuyler

Elaine Heavican was born September 30, 1937, in Clarkson, Nebraska to William and Vlasta (Glodowski) Houfek.  She graduated from Clarkson High School and worked at Mutual of Omaha.  On November 17, 1956, she married Bernard Heavican at St. Mary's Catholic Church in Schuyler.  They lived in Schuyler where Elaine raised their five children and babysat for others as well.  She later worked for 15 years at Cargill Meat Solutions and then cooked at the Schuyler Grade School.  She was a member of St. Augustine's Catholic Church and the Little Flower Altar Society.  Elaine loved cooking, spending time with family and especially loved to follow the grandkids in all their activities.