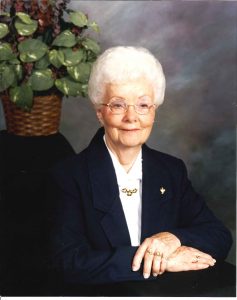 Committal in the Faith East Cemetery

Lunch in the church fellowship hall following the committal

Wanda started painting after Delmar died in 1995.  She also enjoyed watching Husker Football with her sisters.  They got together any time there was a game on TV but never really paid attention because they were busy visiting with each other.  She took many trips to Hawaii with her sisters and they became known as the "white hairs" or "dandelion sisters".  They could always be seen together.  Wanda loved cooking for her family and hosted many Sunday dinners.  She also made "turtle"pancakes for the grandkids.  Her chocolate cake, always made from scratch, was a hit with family and friends.  She was a long time member of the Union Extension Club and worked at the Butler County Hospital until her retirement.