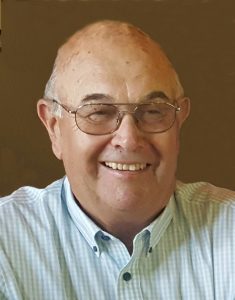 Committal at Marietta with Military Honors

Donald Romshek was born July 5, 1943, on the family farm near Bellwood, to George and Minnie (Smith) Romshek.  He graduated from David City High School and served in the United States Army Reserves for 6 years.  On February 5, 1966, he married Mary Ann Andel at Appleton.  They lived and farmed near Bellwood and Don lived in the house where he was born his entire life.  Don was a lifelong farmer, a life member of the church and was very active in the Bellwood community serving on the Church Board, as a Lector at his church, the Bellwood Legion, Bellwood School Board, Bellwood Coop Board and was a proud member of "The Bunch", a local group of good friends, for over 50 years.  After retiring he loved to mow the yard at home and the cabin, have coffee with friends and visit his brother Charles in David City.  He enjoyed Husker football and following all sports in which his grandchildren participated.  Spending time at the cabin with family was among his favorite pastimes.