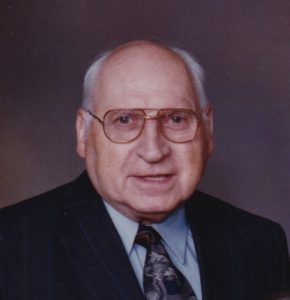 James Lanspa was born March 23, 1925, in David City, to William and Marie (Bruner) Lanspa.  He attended school in Brainard and graduated from Brainard High School.  He  attended the University of Nebraska at Lincoln where he earned a Bachelor's Degree in Biology and a Doctorate in Dentistry.  He then entered into practice with his brother, Norman.  On September 10, 1966, Doc married Delores Rerucha at St. Mary's Catholic Church in David City.  After the death of Norman, Doc had a solo practice until retiring in 2006.  In college, he was a member of Sigma CHI.  Doc was a member of the David City Rotary Club, St. Mary's Catholic Church, the Knights of Columbus and had served on the parish and school councils and the Aquinas Council of Administration.  He played baseball on the Garrison town team and loved all sports, especially the  Huskers.  He practiced dentistry over 50 years but remained a farmer at heart.

Doc  is survived by his wife, Dee of David City, daughter Amy (Kevin) Slama and their children Kate and Caroline, all of Rising City, and son Eric (Nicole) Lanspa of Omaha.  He was preceded in death by his parents, William and Marie Lanspa and brother, Norman Lanspa.