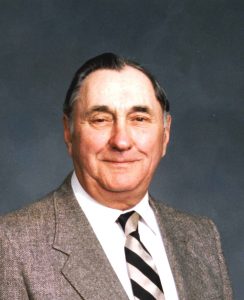 Visitation Sunday 4-7 P.M. with 7P.M.Rosary for Knights of Columbus and Parish

Norman was born September 14, 1923, in Schuyler to Alfred and Rosa (Schindler) Loseke, the youngest and last surviving of five children.  He graduated from Schuyler High School in 1939 and farmed until 1944.  He then enlisted in the United States Army and served from 1944-1946.  On October 12, 1949, Norman and Marie Heinsohn were married at St. Augustine Catholic Church in Schuyler.  Norman went to work for and remained a part of Colfax County Implement for 45 years.  He was a member of St. Augustine Catholic Church, Schuyler American Legion, the Last Man's Club, the Knights of Columbus and the Schuyler Golf Club.

Norman is survived by many nieces, nephews, and old as well as young friends.  He was preceded in death by his parents, wife Marie Loseke, an infant sister, sister Adeline Schneider and three brothers; Alvin, Adolph and Douglas Loseke.