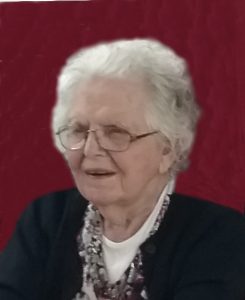 Lois Powell was born  February 22, 1927, in David City to Arthur and Ida (Hickstein) Grubaugh.  She attended school in Rising City, graduated from Normal Training in Shelby and taught school west of the 7 Mile Inn for one year.  She went to work at Bernt's Café and on February 10, 1946, married David Powell in David City.  They lived in Ulysses, moved to Oregon in 1956, returned to Ulysses and in 1961, moved to David City.  Betty worked at Ida's Café and Shop EZ in David City. She enjoyed spending time with family .