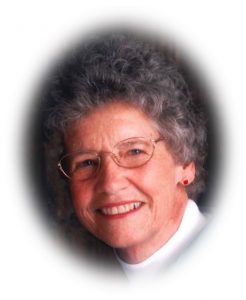 Saturday 9-10 AM also at the church

Betty Jane Romshek was born on June 20, 1935 in Ashland, NE. She lived and attended grade school in Ashland before moving to Bellwood, NE in 1948. There she attended Bellwood High School, graduating in 1953. It was also here where she met the love of her life, Ralph Romshek. The two were united in marriage on August 13, 1953 at St. Peter’s Catholic Church in Bellwood. From this union, two sons were born: Douglas M. Romshek and Daniel L. Romshek.

The couple lived in Columbus for several years after marrying before settling down in the rural Bellwood area. Together they built a family, farm, and fulfilling life. Betty, who had always lived in town, began the life of a farm wife. She learned to milk cows, farrow hogs, and clean chickens, all while raising her two boys. Betty also worked as a cook at Bellwood Elementary for almost 20 years before retiring.

Betty enjoyed co-ed bowling league, attending shows at Aksarben, gardening, and making her signature tomato juice. Her and Ralph were avid Nebraska fans. She regularly attended Nebraska football and baseball games, watched Nebraska volleyball as often as possible, and traveled to numerous Nebraska football bowl games. She was a member of St. Peter’s PCCW and her and Ralph belonged to the infamous Bellwood “Anniversary Club”.

Betty’s greatest love of all was for her family. She always put the needs of her family before her own. She was an extraordinary wife, mother, grandmother, great-grandmother, and caretaker. Betty spent her last years caring for her husband, Ralph. Together, she and Ralph experienced everything life had to offer, both good and bad. They were united in marriage for 63 years before Ralph’s passing in January 2017.