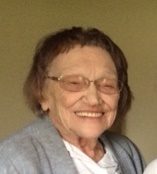 Lillian was born September 1, 1926, in Clarkson, Nebraska , the youngest of four daughters to Frank and Mary(Abraham) Dworak. She graduated from Clarkson High School in 1941.  On April 17, 1952, she married Adolph Saalfeld.  To that union, 8 children were born.  They lived their life in Schuyler and Lillian was a member of St. Mary’s Catholic Church and was a lifelong blood donor. She enjoyed gardening, crocheting, gambling and spending time with family and friends.