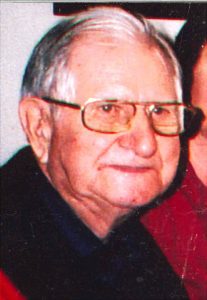 Visitation continues Monday 9:30 til Mass time at the church

Robert C. Stava was born on the family farm at Bruno on February 13, 1918, to Robert M. and  Mary Ann (Divis) Stava. He attended area schools and graduated from David City High School in 1935.  He received a Teaching Certificate from the University of Nebraska in Lincoln.   After a short stint at teaching, he farmed near Bruno and eventually went to work at the Bruno Elevator where he worked for over 30 years, many as manager, retiring in 1989.   On July 7, 1942, he married Agnes Riha at St. Mary's Catholic Church in David City. Robert is remembered as a good father and a very hard worker.