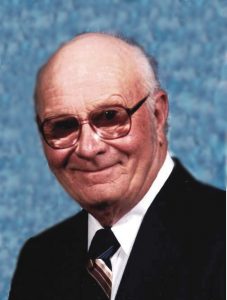 Thursday 9:30-Mass time at the church  Committal in the church cemetery

Lunch following in the church basement   Memorials to the church

Elmer was born June 10, 1926, near Brainard, Nebraska to James and Otilla(Hanis) Lanc.  He attended area schools and graduated from Brainard High School.  After serving in the United States Army, Elmer married Mildred Bartunek, on December 28, 1948, at Sts. Peter and Paul Catholic Church, Abie.  They lived and farmed in the Abie area.  Elmer was a farmer and enjoyed woodworking.  In his  spare  time he liked to fish and loved nothing more than time spent with the grand and great-grandchildren.