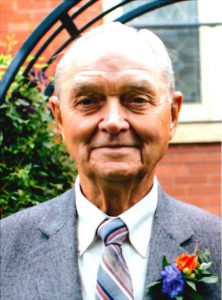 He attended grade school at District 1 and District 10 in Butler County. They later moved to Linwood, NE and Ernie graduated from Schuyler High School in 1949.  He enlisted into the U.S. Army, Korean Conflict in 1953.  While stationed at Fort Riley, KS, he attended truck drivers school and later tested army trucks in Phoenix, AZ. He was discharged as an honorable Sergeant.

On June 18, 1955, he was united in marriage to Janice A. Kriz at St Mary's Catholic Church in Linwood, NE.  Three children were born to this union.

After getting married, he went to Milford Trade School for two years and graduated as an auto mechanic.  He operated his own mechanic shop in Linwood from 1957 until the big flood in 1963 that destroyed his shop and forced it to close.

Ernie was a substitute rural mail carrier employed at the Cedar Bluffs, NE post office and was appointed a permanent mail carrier there from 1994 to 2005 when he retired.

He was also a member of the Schuyler Fraternal Order of Eagles.

Ernie and Janice made their home in Linwood for over 61 years. He loved his family, always attending the grandchildren's activities and being a large part of everyone's lives.

Ernie was all about doing the right thing. He was a born mechanic and was always repairing something.  He enjoyed the simple joys of life.

One great-granddaughter, Kathryn Rose Hicks of Papillion, NE  and many nieces, nephews and friends.

He is preceded in death by his parents Adolf and Rose (Viglicky) Egr, brothers-in-law Wilfred Macholan and Jack Eaton, and sister-in-law Shirley Egr.