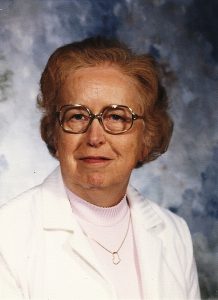 Lunch in the church basement following the committal at Leigh Cemetery

Esther taught in rural schools for thirty years, served as principal for seven years, and then substituted for twenty years. She was the author of a bicentennial play “Our Heritage”, presented by students in several towns. She served the Nebraska Educational Service Unit 7 as a board member representing Colfax County for twenty years and was state secretary for ten years.

She was an active member of St. John’s Lutheran Church, served as church organist for sixty-four years, taught Sunday School, was active in Lutheran Church Women, wrote the 65th and 75th year church histories, assisted with the centennial history and attended annual conventions. She also served as organist in neighboring churches, St. Paul’s of rural Leigh, St. Peter’s in Creston, the Congregational Church in Leigh, and also for Colonial Manor in Clarkson.

She was the co-founder of the House of Yesteryear, established in 1972 to preserve Leigh history in an 1875 building that was the town’s first general store, and served as President until moving to Columbus.  She frequently served as tour guide.

She wrote the history of Leigh for the book, Nebraska: Our Towns, is listed in the Bicentennial edition of Who’s Who in Nebraska, and received one of the 1994 National Community Service awards from AARP. At that time, she averaged 500 hours annually in volunteer work.

Mrs. Mohnsen enjoyed traveling and took many trips overseas to European countries, Israel and Egypt. She was a frequent presenter of slide shows based on her travels, and was also known for her slide show presentation on barns.

She was a member of the Columbus Area Retired Teachers Association, Delta Kappa Gamma, Women’s Club, Community Club, Jolly Wilsonettes Extension Club and a charter member of the Leigh Saddle Club, frequently participating in trail rides and square dancing with her horse, “Ginger”. She maintained an active life style until moving to Columbus.