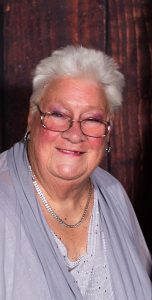 MEMORIAL SERVICE WILL BE LIVE STREAMED

Elaine was born April 1, 1936, in Schuyler to William and Caroline (Dietrich) Dunker. She was baptized at St, John's Lutheran Church. She attended Schuyler Schools and graduated from Schuyler High School in 1953 and worked for the telephone company.  She married Duane Ehlers in 1955 and they had three children, John, Dawn and Sally.  She then worked at BDs in Columbus before relocating to Blackfoot, Idaho in 1973 where she worked for the State Hospital and later taught life skills to the handicapped.  She retired and returned to Nebraska in 2009 to spend time with her family.  Elaine enjoyed sewing and quilting, gardening, cooking, fishing and camping and most of all, time spent with family and friends.  Her specialty was making holiday goodie trays for everyone.