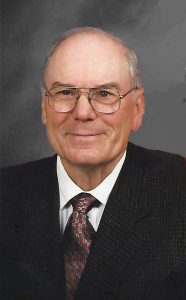 Donald L. Horacek was born July 19, 1930 on the family farm to Joseph and Anna (Svoboda) Horacek.  Don graduated from Brainard High School.    He was a lifelong farmer in the Brainard area.   Don was united in marriage to Helen (Novak) Sedlacek on December 27, 1986 at the Presbyterian Church in Prague.  The couple then lived on the family farm near Brainard.  Don was a very accomplished musician playing Tuba for many years all over eastern Nebraska and even traveling out of state on occasion.  He played for many of the area bands over the years including Math Sladky and Adolph Nemec, and many many others.  In 2000 Don was inducted in the Sokol Omaha  Polka Hall of Fame.   He also was inducted in the Iowa Polka Hall of Fame.  Don was a member of Holy Trinity Catholic Church in Brainard.