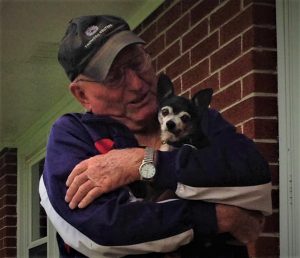 Clarence was born in Schuyler on August 25, 1927, the fifth child of Clarence (Sr.) and Anna (Cuda) White. A lifelong resident of Schuyler, Pappy attended Schuyler schools, where he achieved fame and the nickname he bore for the rest of his life when he was cast as Pappy Yoakum in the school production of “L’il Abner”.

Upon his graduation, Pappy joined the Army (Air Corps) and served during World War II in the Pacific Theatre. After the fighting ended, Pappy helped in the transportation of wounded soldiers to stateside hospitals.

When the war ended and he was demobilized, Pappy came back to Nebraska, living for a time in Omaha where he worked in a packing plant on the South Side.

In 1950, Pappy and Jeanne Dufek, daughter of Adolph and Mary (Bratka) Dufek, were married and settled in Schuyler. They had seven children: Jim, Mick, Tom, Maryann, John, Nancy and Bill. Pappy worked first for Wagner Mills as a truck driver for many years and later at the packing plant, retiring from that job in 1989. Jeanne died in 1991.

Pappy never let a task or responsibility go undone. If something needed to be done, he would simply do it, with no fuss. No one will ever know the countless hours he spent doing repairs or odd jobs for those who needed his help. He served for many years as a volunteer fire fighter,  later as a city councilman and a member of the Divine Mercy Parish Council. He also frequently volunteered at the Benedictine Mission House.

He was also involved with several local organizations, including the American Legion, McLeod Post 47; the Veterans of Foreign Wars, Post 8728; the Knights of Columbus; the Fraternal Order of Eagles; and the Last Man’s Club. In addition, he was proud to be among the select few who gathered most mornings at the Scalehouse for coffee.

Pappy was preceded in death by his parents and his beloved wife, as well as his infant children, John and Nancy, and his siblings Wilfred, Walter, Charles, Clara, Darlene, Allen, Leonard, Gloria, and Richard and brother-in-law, Don Zrust. He is survived by his siblings Robert of Lemoore California, , Karen Zrust of Schuyler, Larry of Oregon, Gary of Spanaway, Washington and by his children Jim and his spouse Tammy of Talmage, Nebraska, Mick of Schuyler Tom and his spouse Bonnie of Omaha, Maryann and her spouse Pat of Bath, Maine and Bill and his spouse Jennifer of Schuyler, as well as several grandchildren and great-grandchildren.

Pappy’s family would like to thank the wonderful staff at Meridian Gardens in Columbus and the hospice caregivers at the Columbus Community Hospital for taking such loving care of their father.