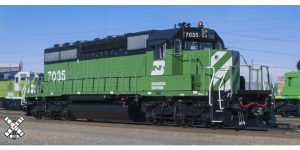 William was born September 20, 1935, in Wymore, Nebraska to Charles and Leona (Hamilton) Darnell.  He attended area schools.  On December 18, 1953, he married Mary Sage at the Methodist Church in Beatrice.  They lived in Wymore, moving to Lincoln in 1963, Rising City in 1995 and finally to David City in 2017.  He was an engineer for the Burlington Northern Railroad from 1959-1997, member of the Brotherhood of Locomotive Engineers and loved to play bingo.