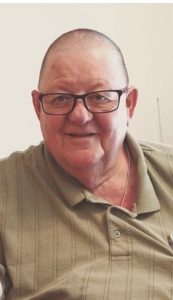 All at the Kracl Funeral Chapel in David City

Merlin Nixon was born in Pender, Nebraska on February 3, 1941, to Ivan and Wilma (Schnier) Nixon.  After graduating from High School he attended Auctioneer School in Mason City, Iowa. He received multiple distinctions.  Mert , along with his brothers and brother-in-law, helped his dad start "Nixon Auctioneers".  He later received his Real Estate license and began Nixon Land and Auction Company.  On August 18, 1961, he married Marlene Schroeder at Salem Lutheran Church in Wakefield.  They lived in Wakefield, Pender, Thurston, Minnesota and moved to David City nine years ago.  He had a love for his grandchildren and great-grandchildren that was like no other.  They were his life along with extended family and friends.  Mert was also an avid sports fan, especially the Huskers.  He and Marlene rarely missed their grandchildren's sporting events.  He had a sense of humor and orneriness that will be sorely missed.  His faith was very important, he served on church councils at St. Mark's in Pender, Salem Lutheran in Wakefield and also was a Board Member of the Wakefield Healthcare Center.