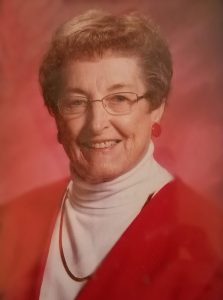 Ludi was born in Stanton County on December 9, 1927, to James and Helen (Urbanek) Molacek.  Following graduation from high school she worked at Boys Town.  On September 19, 1947, she married Marvin Kracl and they made their home in Schuyler.  Over the years Ludi had worked at Wagner Mills, Dale Electronics, the Sky Bowl, Last Chance Bar and the Eagles Club.  She enjoyed visiting the casinos from time to time and for the past 7 years, lived in Omaha with her daughter, Carol. She enjoyed spending time with children and grandchildren, listening to her beloved polka music, playing 31 (cards) with friends and family and watching Nascar and NFL football.  Ludi enjoyed life to the fullest.