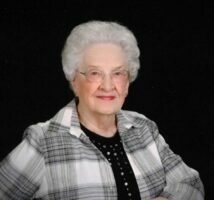 Committal in  the Schuyler Cemetery

Mary Ann was born September 25, 1923, in Columbus to John P. and Emma (Kovar) Muller.  She attended Schuyler Public Schools and graduated from  Schuyler High in  1942.  On September 9, 1947, she married Robert Bosh at St. Augustine's Catholic Church. She lived her entire life in Schuyler, working at JM McDonald's and later the Schuyler Department of Public Works for many years, retiring in 1988.  She was a member of the church and the Little Flower Altar Society.  Mary Ann was a very thoughtful and thankful person, loved life and enjoyed family and friends.  She loved praying the rosary and on  occasion, a fine glass of Sangria.  Her life was an example of following God's plan and appreciating all  of life's gifts.

Mary Ann and Bob had no children and she is survived by many nieces and nephews.  She was preceded in death by her husband Robert, sister Wilma Kelly and brothers John,  Ernest and Ray Muller.